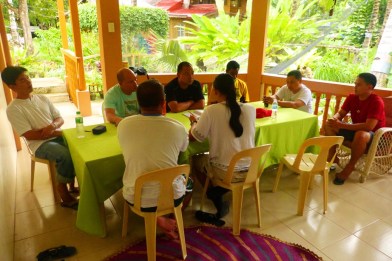 Cagayan de Oro City – It has been about six years now since the Young SCJ Clergy of this region has been organized and every year-end the group gathers together to share, to evaluate and to plan for the upcoming year. This year-end, the gathering took place last November 4-5 at Naawan, Misamis Oriental, about 47km west ouside this city. Everybody arrived for lunch, as scheduled, except for Fr. John Karl and Deacon Niño who could not come down from Manila as well as Fr. Aloisio Back, our beloved adviser, whose flight was cancelled due to a bad weather condition. There were 10 of us present and also keeping in thoughts Frs. Partrick and Rechie who are in Rome. The whole afternoon, until dinner time, was dedicated to sharing, evaluation and planning. The sharing was very good and comprehensive where some personal and pastoral concerns were expressed. There were a lot of new things that came up too. Everybody also expressed excitement for the coming ordination of the new priests and the incoming new clergy for the next year.  Indeed it is such a great joy knowing and foreseeing the moderate yet consistent increase in the number of local priests in the region. Another very interesting point in our discussion was whether we find ourselves ready to go for missio ad gentes. The discussion was very lively and we felt some of us are actually willing to go for missions when given an opportunity.

For the upcoming year, the group foresees having an ongoing formation focusing on Pastoral Management Skills. We ended the meeting with an election of a new Chairman and Secretary, Fr Jigger and Fr Rico, respectively. After supper, we had the opportunity of taking a dip at the pool near the venue. The following day, we concluded our gathering with the celebration of the Eucharist and off we dispersed to our own communities after a simple breakfast.