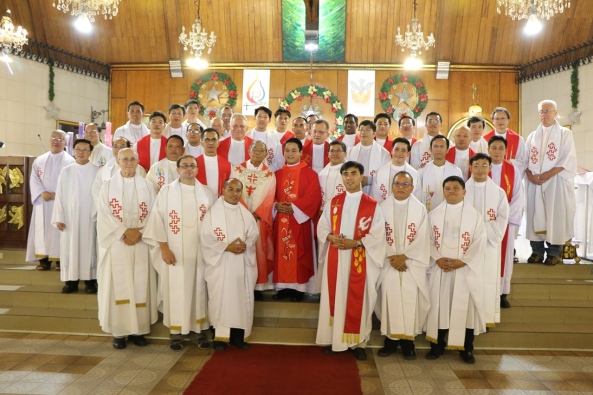 On November 30, 2015, Feast of Saint Andrew, the Apostle, Deacon Dinh Van Nguyen, member of the SCJ District in Vietnam, was ordained a priest. The ceremony of ordination took place during the Holy Mass at  in Tierra Verde Homes I Subdivision, Barangay Pasong Tamo in Quezon City, presided by the ordaining bishop, Most Rev. Antonio R. Tobias, D.D., the ordinary of the Diocese of Novaliches, where the parish and the SCJ Formation House belong. 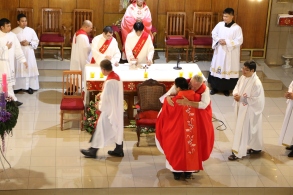 Fr. Dinh is 39 years old and comes from the family of seven children in Dong Nai Province in Vietnam. He has two sisters and four brothers. In 2002, he arrived in the Philippines to study Philosophy at the Xavier University in Cagayan de Oro City, where he met the first SCJ students from Vietnam. Although his initial wish was to become a Jesuit, he got easily attracted to the spirituality of the Priests of the Sacred Heart and decided to be one of them.

His vocation to the priesthood started 21 years ago when he was an altar boy. He got attracted by his parish priest who was very simple and holy. His wish that time was to become one day like him, and now his dreams came true.

Fr. Dinh is the 8th SCJ, who underwent the formation process and was ordained in the Philippines. His plan after the ordination is to return to Vietnam, to work in the formation program and to teach Philosophy or Theology.

The ordination of Fr. Dinh was attended by more than 30 family members and friends from Vietnam and many friends from the Philippines.

Congratulations Fr. Dinh and God bless you on this new way of life from all the members of the SCJ Philippine Region!