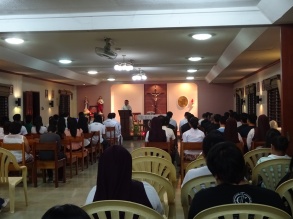 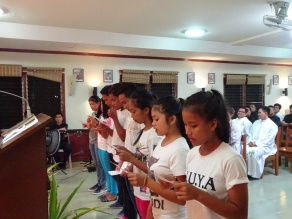 March 14, 2016, marks the 173rd birth anniversary of Fr Leo Dehon, the Founder of the Priests of the Sacred Heart and also 4th anniversary of Canonical Erection of the Philippine Region. In commemoration of the SCJ  Founder, the Cagayan de Oro area composed of three communities (Sacred Heart Formation House, Aluba Parish and Dansolihon Chaplaincy), started the celebration  with a moment of reflection and an hour of adoration of the Blessed Sacrament. The points for reflection on the life of Fr. Dehon and his legacy, were facilitated by Fr. Patrick Gutib, SCJ, Master of the Aspirants.

In the afternoon, members of the Dehonian Family, which also include the Dehonian Youth Missionaries and Lay Dehonians, employees and friends of the Priests of the Sacred Heart joined the concelebrated Thanksgiving Mass, presided by Fr. Francis Pupkowski, SCJ. Before the end of the Mass, the new members of the Dehonian Youth Missionaries made their act of dedication while the elders  renewed their commitment. As usual, the celebration was followed by a simple dinner.