The Solemnity of the Sacred Heart of Jesus is one of the most important patronal feasts that is significantly observed by the entire congregation of which it is dedicated and named after. This year the patronal feast was celebrated on June 23, 2017. 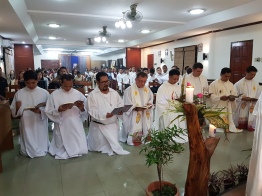 The concelebrated Mass in the afternoon was presided by the superior of the community Fr. Patrick L. Gutib, SCJ. After the reading of the Gospel, all SCJs renewed their commitment as religious, which was followed by the acceptance of new Postulants. Fr. Francis Pupkowski, SCJ, the Regional Superior, accepted four Filipinos and eight Vietnamese into the Postulancy Program. The candidates were presented by theMaster of Postulants, Fr. Patrick L. Gutib, SCJ.

The celebration, which was attended the SCJs from the nearby communities and many visitors, was followed by a common meal.