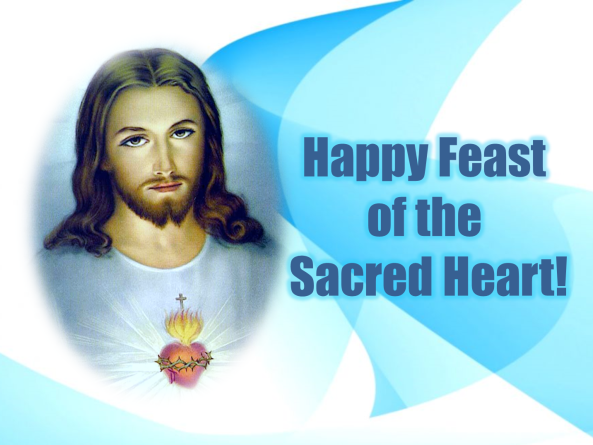 “In biblical language, ‘heart’ indicates the center of the person where his sentiments and intentions dwell.
In the Heart of the Redeemer, we adore God’s love for humanity, his will for universal salvation, his infinite mercy. Practicing devotion to the Sacred Heart of Christ, therefore, means adoring that Heart which, after having loved us to the end, was pierced by a spear and from high on the Cross poured out blood and water, an inexhaustible source of new life.”
– Pope Benedict XVI, June 5, 2005

The Solemnity was first celebrated in France. The liturgy was approved by the local bishop at the behest of St. John Eudes, who celebrated the Mass on August 31, 1670. The celebration was quickly adopted in other places in France. In 1856, Pope Pius IX established the Feast of the Sacred Heart as obligatory for the whole Church.

But the devotion to the Sacred Heart of Jesus is much older. The beginnings of a devotion of the love of God symbolized by the heart of Jesus are found in the fathers of the Church, including Origen, St. Ambrose, St. Jerome, St. Augustine of Hippo, St. Hippolytus of Rome, St. Irenaeus, St. Justin Martyr, and St. Cyprian. In the 11th century, this devotion found renewal in the writings of Benedictine and Cistercian monasteries. In the 13th century, the Franciscan St. Bonaventure’s work “With You is the Source of Life” (which is the reading for the Divine Office on the Solemnity of the Sacred Heart) began to point to the heart as the fountain from which God’s love poured into our lives. Also in the 13th century, there was the “Vitis Mystica” (the mystical vine) a lengthy devotional to Jesus, which vividly describes the “Sacred Heart” of Jesus as the font and fullness of love poured into the world. This work is anonymous, but most often attributed to St. Bonaventure.

At the end of the 13th century, St. Gertrude, on the feast of St. John the Evangelist, had a vision in which she was allowed to rest her head near the wound in the Savior’s side. She heard the beating of the Divine Heart and asked John if, on the night of the Last Supper, he too had felt this beating heart, why then had he never spoken of the fact. John replied that this revelation had been reserved for subsequent ages when the world, having grown cold, would have the need to rekindle its love.

In the late 17th century the devotion was renewed and adopted elsewhere, especially following the revelations to St. Marguerite Marie Alacoque. The saint, a cloistered nun of the Visitation Order, received several private revelations of the Sacred Heart, the first on December 27, 1673, and the final one 18 months later. The stained glass window centered in the sanctuary dome recalls the Saint and her vision.

Initially discouraged in her efforts to follow the instruction she had received in her visions, Alacoque was eventually able to convince her superior of the authenticity of her visions. She was unable, however, to convince a group of theologians of the validity of her apparitions, nor was she any more successful with many of the members of her own community. She eventually received the support of the community’s confessor who declared that the visions were genuine. Alacoque’s short devotional writing, “La Devotion au Sacré-Coeur de Jesus” (Devotion to the Sacred Heart of Jesus), was published posthumously in 1698. The devotion was fostered by the Jesuits and Franciscans, but it was not until the 1928 encyclical “Miserentissimus Redemptor” by Pope Pius XI that the Church validated the credibility of Alacoque’s visions of Jesus Christ in having “promised her [Alacoque] that all those who rendered this honor to His Heart would be endowed with an abundance of heavenly graces.”

In the late 19th century, Sr. Mary of the Divine Heart received a message from Christ. This eventually led the 1899 encyclical letter Annum Sacrum in which Leo XIII decreed that the consecration of the entire human race to the Sacred Heart of Jesus should take place on June 11, 1899.

On the 100th anniversary of the Feast of the Sacred Heart in a landmark encyclical, Haurietis Aquas (Latin: “You will draw waters”; written May 15, 1956), Pope Pius XII began his reflection by drawing from Isaiah 12:3, a verse which alludes to the abundance of the supernatural graces which flow from the heart of Christ. Haurietis Aquas called the whole Church to recognize the Sacred Heart as an important dimension of Christian spirituality. Pius XII gave two reasons why the Church gives the highest form of worship to the Heart of Jesus. The first rests on the principle whereby the believers recognize that Jesus’ Heart is hypostatically united to the “Person of the Incarnate Son of God Himself.” The second reason is derived from the fact that the Heart is the natural sign and symbol of Jesus’ boundless love for humans. The encyclical recalls that for human souls the wound in Christ’s side and the marks left by the nails have been “the chief sign and symbol of that love” that ever more incisively shaped their life from within.

In a letter on May 15, 2006, Benedict XVI wrote: “By encouraging devotion to the Heart of Jesus, [we exhort] believers to open themselves to the mystery of God and of his love and to allow themselves to be transformed by it. After 50 years, it is still a fitting task for Christians to continue to deepen their relationship with the Heart of Jesus, in such a way as to revive their faith in the saving love of God and to welcome Him ever better into their lives.

As the encyclical states, from this source, the Heart of Jesus, originates the true knowledge of Jesus Christ and a deeper experience of His love. Thus, according to Benedict XVI, we will be able to understand better what it means to know God’s love in Jesus Christ, to experience Him, keeping our gaze fixed on Him to the point that we live entirely on the experience of His love so that we can subsequently witness to it to others.