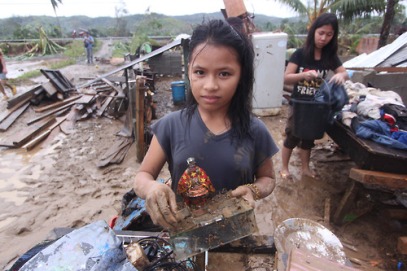 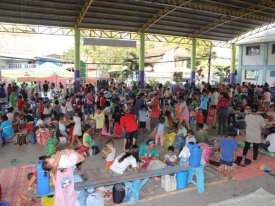 On December 4, 2012, almost one year after the deadly typhoon “Sendong” that claimed at least 1500 lives, another super typhoon “Pablo” (international name “Bopha”) passed through the southern island of Mindanao. Even the second one, according to the specialists, was stronger; it caused fewer damages than the previous. Thanks to the early warnings, this time the people were better prepared. Nevertheless, some barangays in Cagayan de Oro were flooded and some old trees were uprooted. Also the power supply and water were cut off.

Thanks to God, the SCJ and Kasanag daughters Foundation were very slightly affected by the typhoon. All the girls from Kasanag were moved to a safer place. 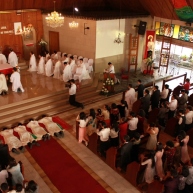 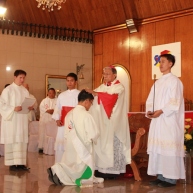 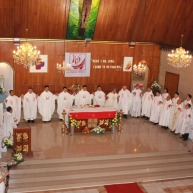 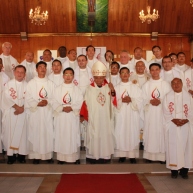 November 30, 2012, Feast of St Andrew Apostol and Bonifacio Day in the Philippines, was a very special day for the SCJ Philippine Region. Four of our confreres: Patrick, Thai, Khoa and Loc received the Holy Order of Priesthood. Patrick is a Filipino while the three others come from Vietnam. The celebration was held at San Lorenzo Ruiz Parsh in Quezon City, a walking distance from the Dehon House where our scholastics live. The ordaining bishop was his Excellency Antonio Tobias, DD, the bishop of Novaliches, our old-time friend from Pagadian Diocese. The celebration was very nice and was attended by more less 500 people. Majority of them were Vietnamese, members of different religious congregations and friends of the new priests.