On August 12, 2016, two formation communities in Manila and Cagayan de Oro joined the congregation-wide celebration of 91st Death Anniversary of the Founder of the Priests of the Sacred Heart of Jesus, Venerable Fr. Leo John Dehon (1843 – 1925). 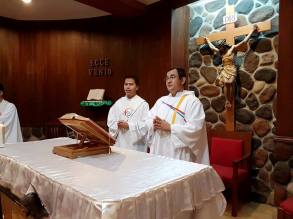 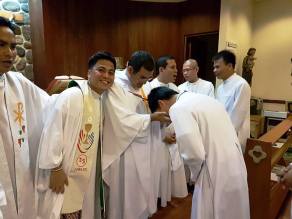 In Manila, the celebration of the Founder was at the same time a Thanksgiving Mass of Fr. Sergio Matumoto, SCJ, who was ordained a priest last June 3, 2016, in Brazil and just returned to the Philippines. The community was joined by the members of the three nearby pastoral communities. In Cagayan de Oro, Fr. Rico Lapinig, SCJ, who just returned from the World Youth Day in Krakow, Poland, was the main celebrant. In his homily, Fr. Rico combined the life message of the Founder and of the Holy Father, Pope Francis. The celebration was attended by SCJs from Aluba Parish and Dansolihon, Lay Dehonians, Dehonian Youth and friends.