On September 28, 2016, the SCJ community at the Dehon House in Manila celebrating the memorial of St. Lorenzo Ruiz, the first Filipino saint martyr, also witnessed the renewal of religious vows of one of its members. During the Holy Eucharist, Fra. Vincent Bat Nguyen, SCJ, a member of the SCJ Vietnam District, renewed his vows of Chastity, Poverty and Obedience in the Congregation of the Priests of the Sacred Heart of Jesus. The vows were accepted by his superior Fr. Francis Vu Tran, SCJ, the main presider of the ceremony, which was attended by a number of SCJs, religious from different, male and female, congregations and friends. As usual, the ceremony was followed by a simple yet delicious dinner.

St. Lorenzo Ruiz is the first Filipino saint. He is also the first Filipino martyred for the Christian Faith. Lorenzo Ruiz was a layman, married, and had two sons and a daughter. Born in Binondo, Manila, about 1600’s, he was educated in the school of the Dominicans there. He served as an altar boy and later was a helper and clerk-sacristan in the church of Binondo. He was a member of the Confraternity of the Rosary. He made his living probably as a calligrapher, one who renders documents in beautiful penmanship for private or official use. To be sure, that work denoted an accomplished and educated person, especially at a time when many an illustrious personage were far from excelling in this art. An adverse event made him leave the Philippines in 1636.

When he was in his late twenties or early thirties, he became involved or was accused of being involved in a criminal case, the circumstances of which are far from clear. Whether he was involved or not, one thing was clear, he was afraid that, as a consequence of a trial or mistrial, he might be given a death sentence. Upon landing in Japan where Christians were being persecuted, he was arrested and imprisoned together with his companions. He underwent inhuman tortures and valiantly confessed his Christian Faith. Refusing to renounce his Faith, he told his executioner that he was ready to die for God and give himself for many thousands of lives if he had them. On September 27, 1637, he was hung from a gallows by his feet, his body falling into a pit. After two days of agony, he died of bleeding and suffocation. His body was cremated and the ashes thrown into the sea. He and fifteen companions, martyred in the same persecution, were beatified by Pope John Paul II in Manila on February 18, 1981 and elevated to full honors of the altar by canonization on October 18, 1987 in Rome. Their feast day is on September 28th.

San Lorenzo Ruiz Parish (SLRP) located in Gabriela Silang Street, Tierra Verde 1 Homes, Congressional Avenue Ext, Quezon City is the newest place of SCJ presence in the Philippines. It was entrusted to the SCJs by Bishop of Novaliches, Most Rev. Antonio R. Tobias, DD, on July 1, 2016. The parish is a walking distance from the SCJ Theologate (Dehon House) and has an important place in the history of the SCJ Philippine Region for being a venue of many sacerdotal and diaconal ordinations. 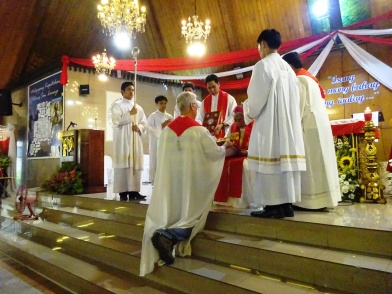 On September 25, 2015, the parish community celebrated its 29th Feast of the Patron. It was also the date of official installation of the new pastoral team with Fr. Aloisio Back, SCJ as a parish priest, Fr. Rechie Gier, SCJ as a parochial vicar and Fr. Candido Bayron Jr., SCJ as a pastoral aid. The  ceremony of installation was held during the main Holy Mass at 10:30 in the morning and was attended by many parishioners, SCJs, religious and visitors.

At the moment the SCJs run 6 parishes, 1 chaplaincy, 1 mission area and 3 formation houses located in Luzon, Visayas and Mindanao.

For further information please visit: History of the Parish