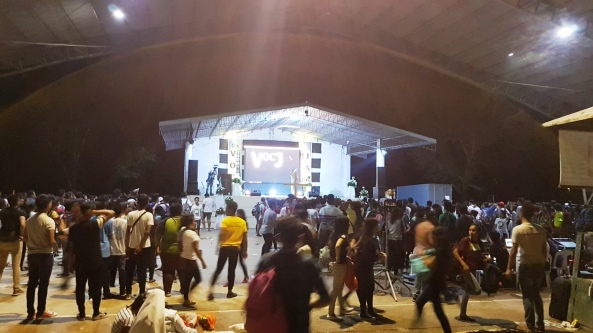 The activity started at 3:00PM with a Pilgrim Walk from Our Lady of Fatima Parish, Camaman-an going to the venue at Saint John Vianney Seminary covered court. Upon arriving at the venue there were opening salvo to animate the participants while at the same time registration was going on. At around 6:00PM dinner was served .

Right after dinner, Bishop-elect Raul Dael, SSJV gave a talk about vocation in general. All throughout the talk,  the participants were  attentive to the speaker.  After, the talk on vocation , the big group was divided into three groups for another talk on Married Life, Priestly, Religious and Single Blessedness. After each talk, the youths were given time to interact by encouraging them to ask questions to the speakers.

The vocation talk was followed by the Adoration of the Blessed Sacrament. While the adoration was going on, priests, religious men and women  around the venue  were conducting counseling, to those who were willing and needed it.  At 5:00AM the Vocation Jamboree was concluded with the celebration of the Holy Eucharist celebrated by Bishop-elect Fr. Raul Dael, SSJV and concelebrated by all priests who attended the activity.