Dehonian Mission Community is a group of lay people connected with the Mary Mother of Church and St. Maximilian Kolbe Parish in Zagreb, Croatia, administered by SCJ priests. The group was established on March 14th, 2011.  The main goal of this community is to help the Dehonian missions. Ms. Mirela Vukovic, the head of the community, wrote “We decided to have 3 charity actions per year, when we collect money from our parishioners. Last year we sent our donations to Dehonian priests in Africa and in upcoming year we would like to support also the Dehonian mission in the Philippines.”

On the occasion of the Mission Sunday, the Dehonian Mission Community (DMZ) organized on October 20th, 2013, an exhibition and fundraising campaign for the Dehonian mission in the Philippines. Since last year, the DMZ is linked with the Dehonians, through Fr. Francis Pupkowski SCJ, who has been working on the island of Mindanao since 1989, one of the poorest and least developed parts of the country. Recently, the island has been hit twice by devastating typhoons. Typhoon Pablo in December 2012 – was one of the strongest, but due to earlier warnings it did not cause as many damages as Typhoon Sendong in 2011. Besides the damages, it claimed many lives. Until now, a number of families continue to live in temporary shelters. That’s why a group of different religious communities has decided to raise funds to buy a piece of land and start construction of new residential houses. The plan is to build 500 of them. The cost of one house is 125,000 Philippine Pesos, or 3,000 US Dollars. Last June 2013, the DMZ was able to send to the Philippines an amount good for one house which was collected in earlier actions.

The exhibition prepared by Ms. Mira Vukovic  and Pavice Ercegovac comprised of three parts: the Philippines and scale of damages due to typhoons, Dehonians in the Philippines , and the ” Croatian house” – a house that is being built from funds collected by the faithful and numerous friends of the mission .

On Oct. 16, Roman Catholics celebrate the life of St. Margaret Mary Alacoque, the French nun whose visions of Christ helped to spread devotion to the Sacred Heart throughout the Western Church. Margaret Mary Alacoque was born in July of 1647. Her parents Claude and Philiberte lived modest but virtuous lives, while Margaret showed herself to be a serious child with a focus on God. Claude died when Margaret was eight, and she suffered a paralyzing illness from the ages of nine to 13. A struggle over her family’s property made life difficult for Margaret and her mother for several years. During her illness, Margaret made a vow to enter religious life. During adolescence, however, she changed her mind. For a period of time she lived a relatively ordinary life, enjoying the ordinary social functions of her day and considering the possibility of marriage. Her life changed in response to a vision she saw one night while returning from a dance, in which she saw Christ being scourged. Margaret believed she had betrayed Jesus, by pursuing the pleasures of the world rather than her religious vocation. At age 22, she decided to enter a convent. Two days after Christmas of 1673, Margaret experienced Christ’s presence in an extraordinary way while in prayer. She heard Christ explain that he desired to show his love for the human race in a special way, by encouraging devotion to “the heart that so loved mankind.” She experienced a subsequent series of private revelations regarding the gratitude due to Jesus on the part of humanity, and the means of responding through public and private devotion. But the superior of the convent she dismissed this as a delusion. This dismissal was a crushing disappointment, affecting the nun’s health so seriously that she nearly died. In 1674, however, the Jesuit priest Father Claude de la Colombiere became Margaret’s spiritual director. He believed her testimony, and chronicled it in writing. Fr. de la Colombiere – later canonized as a saint – left the monastery to serve as a missionary in England. By the time he returned and died in 1681, Margaret had made peace with the apparent rejection of her experiences. Through St. Claude’s direction, she had reached a point of inner peace, no longer concerned with the hostility of others in her community. In time, however, many who doubted her would become convinced as they pondered what St. Claude had written about the Sacred Heart. Eventually, her own writings and the accounts of her would face a rigorous examination by Church officials. By the time that occurred, however, St. Margaret Mary Alacoque had already gained what she desired: “To lose myself in the heart of Jesus.” She faced her last illness with courage, frequently praying the words of Psalm 73: “What have I in heaven, and what do I desire on earth, but Thee alone, O my God?” She died on October 17, 1690, and was canonized by Pope Benedict XV in 1920.

Bohol earthquake strongest to hit Visayas and Mindanao in over 20 years. 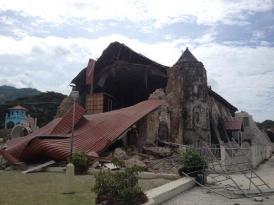 Director Renato Solidum of the Philippine Institute of Volcanology and Seismology (Phivolcs) told the Philippine Daily Inquirer that the earthquake was the strongest felt in the Visayas and Mindanao in 23 years.

Solidum said that the movement of the East Bohol fault triggered the tremor, which occurred at 8:12 a.m.  with its epicenter located two kilometers southeast of the town of Carmen in Bohol. It occurred 33 kilometers below the surface of the earth, he said.

It was felt at Intensity III in Davao, Canlaon, Cotabato, Zamboanga, Surigao and Borongan Cities; as well as La Costellana town in Negros Occidental; Bukidnon Province; Tarragona town in Davao; Laoan in Antique; Banisilan, North Cotabato; and the towns of Potongan, Polanco, Labason, and Manukan, all in Zamboanga del Norte.

Magnitude is a measure of the energy released by the earthquake while intensity measures the effects of an earthquake on objects or the environment as felt or perceived by humans.

It defines liquefaction as a process whereby loose saturated sand loses strength during an earthquake and behaves like liquid.

An earthquake with a magnitude of 7 or 8 is considered major and can cause considerable damage near the epicenter. Shallow-seated or near-surface major earthquakes when they occur under the sea, may generate tsunamis. Tuesday morning’s quake did not trigger a tsunami.

Solidum told the Philippine Daily Inquirer that the last strong earthquake recorded in Bohol was on February 8, 1990. It had a magnitude of 6.8 and its epicenter was located 17 kilometers east of Tagbilaran City.

According to Phivolcs records, the quake caused “ground fissures, landslides, rockfalls, ground subsidence and collapse, sand or mud fountaining and sudden increase on the sea level. Most of the manifestations were particularly observed and experienced by the towns of Jagna, Valencia, Duero, Guindulman and Garcia Hernandez. The force of the incoming waves from the sea caused Alijuan River in Duero to flow inland immediately after the earthquake.”

The strongest recorded earthquake to hit Luzon had a  magnitude 7.9 and struck on July 16, 1990, with its epicenter near Rizal town in Nueva Ecija. An estimated 1,600 people were killed in the temblor. That quake devastated Baguio City and caused extensive damage in Pangasinan and Nueva Ecija.

Asked how he would describe the strength of Tuesday’s earthquake, he said, “The magnitude, the energy released by the quake is equivalent to 32 Hiroshima bombs.” Solidum added that he expected more aftershocks to follow the major tremor.

As of noon Tuesday, Phivolcs recorded 137 aftershocks in Carmen and Tagbilaran towns in Bohol the strongest of which had a magnitude of 4.3 and occurred at 9:37 a.m. It was felt at Intensity IV in Tagbilaran City.

The country’s Catholic bishops issued an appeal for humanitarian aid in Zamboanga on Tuesday as the southern Philippine city looked to recover from three weeks of fighting between government troops and Muslim rebels.

“We call on your help to sustain the Church’s aid, and together bring the Christian message of love and peace to our brothers and sisters in need,” said Bishop Broderick Pabillo, chairman of the social action secretariat of the bishops’ conference.

The prelate said the fighting between the military and Moro National Liberation Front (MNLF) fighters had a “devastating impact” on the people.

At least 200 people – including rebels, security forces and civilians – have been killed in the fighting. The government declared that “the worst is over” at the weekend but that sporadic fighting is still taking place.

The needs of more than 100,000 displaced people will continue to rise each day while homes and communities are rebuilt over the next three months, Pabillo said.

Authorities say some 10,000 homes were lost during the fighting and estimated losses to business have been pegged at about US$115 million.

The National Secretariat for Social Action of the Bishops’ Conference of the Philippines has so far provided a $2,300 initial contribution to Zamboanga archdiocese’s relief efforts.

The archdiocese is currently catering to the needs of some 18,736 evacuees in 11 Church-run evacuation centers.

Pabillo said the situation in the centers varies, adding that at least seven of the facilities have kitchens, but the rest have no provision for cooking.

The government’s social welfare office yesterday announced that it has set aside $2.3 million for “food assistance, non-food items, financial assistance, cash-for-work in the operation of community kitchens, hygiene and sanitation, and meal distribution” in the city.