On December 2, 2017, the Immaculate Concepcion Parish in Aluba, Cagayan de Oro City, celebrated the dedication of its newly constructed church. The construction of the new parish church officialy started on February 28, 2015, and in less than three years has been completed. It looks impressive! All the details has been studied and implemented by the construction committee under the supervision of the parish priest Fr. Janusz Burzawa, SCJ, who was the initiator of this project and also fundraiser. By the way, this is the third project that Fr. Burzawa is involved. In his past assignments he built a new church in Dimataling, Zamboanga del Sur and prepared complete plans for the new church in Dumalinao, also in Zamboanga del Sur, which now is in its final stage of completion.

The construction of the new church went in pair in building of the local Christian Community, which Fr. Burzawa considers as the most important. There is a number of pastoral initiatives introduced by him such as home visitations, special catechesis, pledges, retreats and recollections for all the faithful, and recently “Parade of Saints” replacing the pagan Halloween. 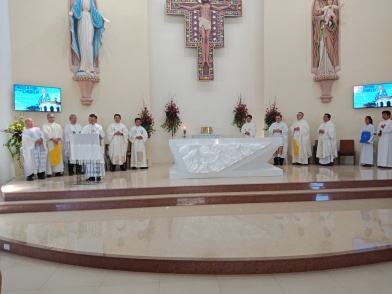 The ceremony of dedication was presided by Fr. Florencio Salvador, SSJV,  a former pastor of this parish and delegate of the archbishop Most Rev. Antonio J. Ledesma, SJ,DD, who was assisted by several diocesan priests from the vicariate and SCJs from the neighbor communities.

After the Eucharistic celebration and lunch together, the parish community celebrated its “Family Day”, which in the future will be held   on the first Saturday of December.