On October 1, 2019, the memorial of St. Therese of Lisieux and patronal feast of the pious association of Theresian Missionaries of Mary (TMM), Sr. Ma. Eulogia “Yollie” Novabos, TMM, celebrated her Silver Anniversary of religious vows of Chasity, Poverty and Obedience.

On this occasion during the concelebrated Mass, presided by Most Rev. Antonio J. Ledesma, SJ, D.D., Sr. Yollie repeated her commitment to God, the Church and her community.

The association of the Theresian Missionaries of Mary (TMM) was founded in 1985 by a Columban missionary Fr. Francis Chapman, SSC. As of now the community has 14 members on final and temporary vows working in different places and apostolates within the Archdiocese of Cagayan de Oro. The motto of their group are the words of St. Therese “My vocation is love.” 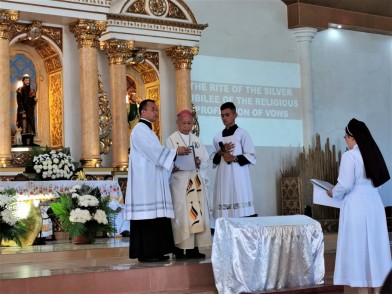 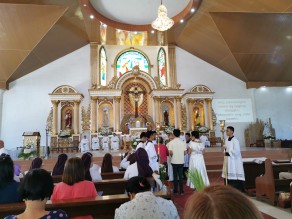 Sr. Yolly, who comes from Lugait, Misamis Oriental, made her first profession of vows in 1994. As a religious, she was assigned in many different places and positions. The longest time she spent in St. Joseph School in El Salvador City as a financial oficer. Since July 16, 2014, Sr. Yollie has been working for the Priests of the Sacred Heart (SCJ) as a secretary in the fundraising office.

During the same ceremony her co-sisters renewed also their vows.

The celebration was attended by many diocesan and religious priests from the Archdiocese of Cagayan de Oro, family members, friends and benefactors of the community. At the end of the Mass all participants placed red roses at the feet of St. Therese known as a “little flower.” The celebration was held at the “Our Lady of the Snows” Parish in El Salvador City.