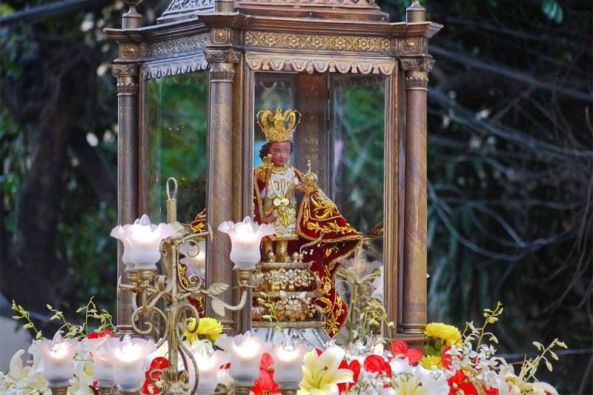 Today, on the 3rd Sunday of January, the Church in the Philippines celebrates the Feast of Santo Niño, one of the most popular religious celebrations not only in Cebu City, but also in the entire Philippines.

Short History of the Image of Santo Niño de Cebu

In April 1521, Ferdinand Magellan, in the service of Charles V of Spain, arrived in Cebu during his voyage to find a westward route to the Indies. He persuaded Rajah Humabon and his chief wife Humamay, to pledge their allegiance with Spain. They were later baptized into the Catholic faith, taking the Christian names Carlos (after Holy Roman Emperor Charles V) and Juana (after Joanna of Castile).

According to Antonio Pigafetta, Italian chronicler to the Spanish expedition, Ferdinand Magellan himself presented the Santo Niño to the newly baptized Queen Juana as a symbol of the alliance. To her husband Carlos, Magellan presented the bust of “Ecce Homo”, or the depiction of Christ before Pontius Pilate. He then presented an image of the Virgin Mary to the natives who were baptized after their rulers. Magellan died on April 27, 1521 in the Battle of Mactan, leaving the image behind. Legends say that after initial efforts by the natives to destroy it, the image was venerated as the animist creation deity Bathala. Many historians consider the facial structure of the statue made from Belgium, where Infant Jesus of Prague statues were also common.

In 1980, Filipino historian Nicomedes Márquez Joaquín wrote about the 44 years after Magellan’s soldiers left before the next Spanish expedition came under Miguel Lopez de Legazpi. Joaquín said that the statue was once denounced by natives as originally brought by Magellan, but was reinforced again by de Legaspi which the natives continued to dispute claiming that the statue came originally from their land.

On April 28, 1565, Spanish sailor Juan de Camus found the statue in a pine box amidst the ruins of a burnt house. The image, carved from wood and coated with paint, stood 30 centimeters tall and wore a loose velvet garment, a gilded neck chain, and a woolen red hood. A golden sphere, a replica of the world, was in the in the left hand, and the right hand is slightly raised in benediction. Camus presented the image to Miguel Lopez de Legazpi and the Augustinian priests; the natives refused to associate it with the gift of Magellan, claiming it had existed there since ancient times. Writer Dr. Resil Mojares wrote that the natives did so for fear that the Spaniards would demand it back. The natives’ version of the origin of the Santo Niño is in the Agipo (stump or driftwood) legend, which states that the statue was caught by a fisherman who chose to rid of it, only to have it returned with a plentiful harvest.

The statue was later taken out for a procession, afterward which Legaspi then ordered the creation of the Confraternity of the Santo Niño de Cebú, appointing Father Andres de Urdaneta as head superior. Legaspi instituted a fiesta to commemorate the finding of the image, and although the original celebration still survives, Pope Innocent XIII moved the celebration to the Third Sunday of January to avoid conflict with Eastertide.

The Minor Basilica of Santo Niño (Spanish: Basilica Minore del Santo Niño) was built on the spot where the image was found by Juan de Camus. The parish was originally made out of bamboo and mangrove palm and claims to be the oldest parish in the Philippines. Pope Paul VI elevated its rank as Minor Basilica on its 400th year anniversary.