Like in the previous years, on November 1, 2019, parishioners of the Immaculate Conception Parish in Aluba, Cagayan de Oro, took part in a “Parade of Saints” to celebrate All Saints’ Day. The parade is a counter-culture activity to the pagan celebration of Halloween and an avenue of catechizing children at an early age, and families, about the lives of the saints. 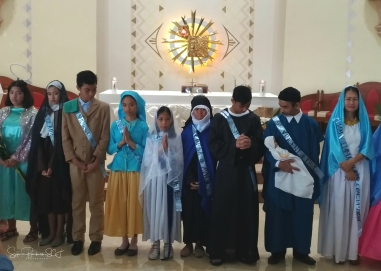 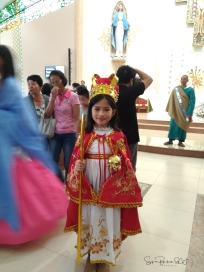 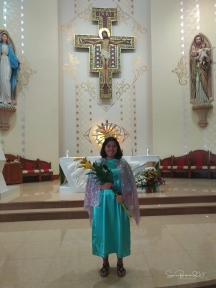 Catholic saints are people who lived extraordinary lives. Each saint, the Church honors, responded to God’s invitation to use his or her unique gifts for the glory of God and the good of others. God calls each one of us to be a saint. 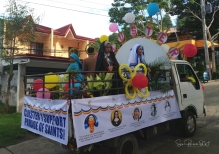 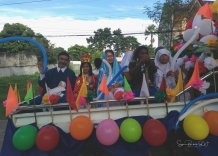 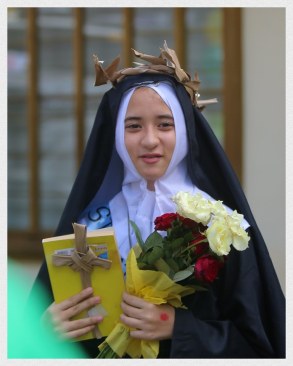 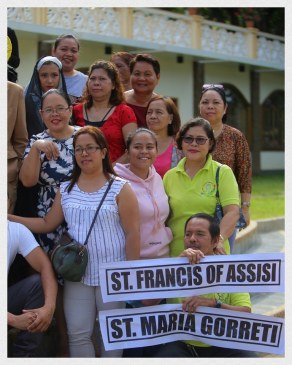 In the Church’s liturgical calendar, November 1 is the Solemnity of All Saints. The preceding eve is known as “All Hallow’s Eve” or Halloween. The root word of Halloween – ”hallow” – means ”holy.” The suffix “een” is an abbreviation of “evening.” It refers to the Eve of All Hallows, the night before the Christian holy day that honors saintly people of the past. Unfortunately, the Western influence took away the “Holy” in Halloween through dress up parties on October 31 where people wear costumes to look like monsters, ghouls, and other evil entities. Whether they willfully know this or not, the practice of dressing up like creatures of the night and demons have pagan origins.

In what is seen as a “counter-cultural revolution” to the Western Halloween observance, Catholic parishes around the country dress up their faithful followers in costumes that are of the complete opposite of vampires and zombies. Instead of wearing terrifying and bloody costumes and masks, the Church encourages the faithful to hold “Parade of Saints” or let the children wear costumes of Saints. 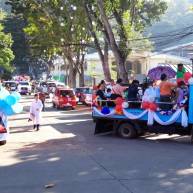 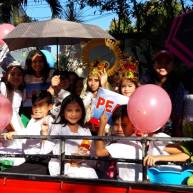 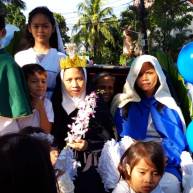 Meaning and Origin of All Saints Day

In the early years when the Roman Empire persecuted Christians, so many martyrs died for their faith, that the Church set aside special days to honor them. For example, in 607 Emperor Phocas presented to the pope the beautiful Roman Pantheon temple. The pope removed the statues of Jupiter and the pagan gods and consecrated the Pantheon to “all saints” who had died from Roman persecution in the first three hundred years after Christ. Many bones were brought from other graves and placed in the rededicated Pantheon church. Since there were too many martyrs for each to be given a day, they were lumped together into one day. In the next century, All Saints Day was changed by Pope Gregory III to today’s date–November l. People prepared for their celebration with a night of vigil on Hallows’ Eve — Halloween (possibly because of the strong holdover influence of the Celtic Samhain festival which many Christians in Ireland, Britain Scotland and Wales had continued to observe).

In the 10th century, Abbot Odela of the Cluny monastery added the next day–November 2nd–as “All Souls” Day” to honor not just the martyrs, but all Christians who had died. People prayed for the dead, but many unchristian superstitions continued. People in Christian lands offered food to the dead–as it had been in pagan times. The superstitious also believed that on these two days, souls in purgatory would take the form of witches, toads, or demons and haunt persons who had wronged them during their lifetime. As happens so often in Church history, sacred Christian festivals can absorb so many pagan customs that they lose their significance as Christian holidays. 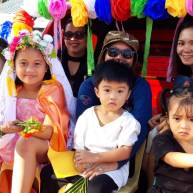 The Catholic Bishops’ Conference of the Philippines-Episcopal Commission on Laity (CBCP-ECL) on Saturday, October 27, 2018, called on the faithful to refrain from participating in “secular” activities, including the celebration of Halloween and wearing of scary costumes.

Bishop Broderick Pabillo, chairman of CBCP-ECL, said such event is not a Christian celebration as Halloween is a “celebration of death” while All Soul’s Day and All Saints’ Day are “celebration of life”.

In an interview over Church-run Radio Veritas, the bishop explained why the two-day observance is more about life than death.

When people visit the dearly departed during these days, they say prayers, offer flowers, light candles and bring food, which are all signs of life. “It is really a celebration of life,” he said.

“Let us go to the cemeteries to remember and pray for our departed,” Bishop Pabillo said.

“The Parade of Saints is a reclaiming of the Eve of All Saints day for Christ. It really belongs to Christ because it is the beginning of All Saints’ Day, the feast of all who have washed their robes with the Blood of the Lamb.”

The “Parade of Saints” was also, not for the first time, organized by the Immaculate Concepcion Parish in Aluba, Cagayan de Oro. As usual, the celebration started on November 1 at 7:00 am with the Holy Eucharist  and was followed by the “Parade of the Saints.” around the parish.

Similar parade was also held the day before, on October 31, at the Medalla Milagrosa Quasi Parish in Talisay, Hilongos, Southern Leyte, during the culmination of the Month of Holy Rosary. 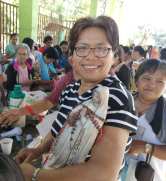 To reclaim the sacredness of the eve of All Saints, we need to create a counterculture that will serve as a Christ-centered alternative to Halloween by starting a tradition of our own. The Parade of Saints is a fitting tradition that can be firmly established in every parish and diocese to bring back the sacredness of All Saints Day and to give back the glory to God.