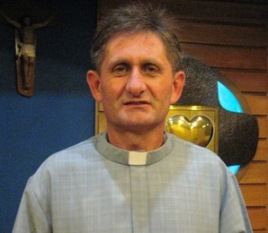 Today, on March 19, 2010, on the Feast of St. Joseph, the Holy See has announced the good news regarding episcopal nomination of our SCJ confrere Rev. Fr. Vilsom Basso, scj. Fr. Vilsom Basso belongs to the SCJ Philippine District and until now was assigned as formator in Cagayan de Oro City and Pastor in charge in Dansolihon Chaplaincy. His new assignment will be as a bishop in diocese Caxias in Maranhão (Brazil).

Fr. Vilsom Basso, scj was born on February 16, 1960 in Cinquentenário Tuparendi, in the diocese of Santo Ângelo, in the province of Rio Grande do Sul. After his elementary studies in his native city, he entered the Congregation of the Priests of the Sacred Heart of Jesus (Dehonians). He received his title of Bachelor in Philosophy in Brusque (1979-1981) and one in theology in Taubaté (1982-1985). On 25 February 1985 he made the Final Profession in the Congregation of the Priests of the Sacred Heart and on December 28th 1985 he was ordained a priest. In 1991, he followed a postgraduate course in pastoral theology at the University Javeriana in Bogota, Colombia.

In the Diocese of Viana, State of Maranhão, he was assigned as parochial vicar in the parish of “Santa Inês” (1986-1987) and Alto Alegre (1993) and as a Pastor of the Parish of “Santa Luzia” (1998-2003). In the Archdiocese of São Luís do Maranhão, he was a parochial vicar (1988-1992) and then the parish priest (2004-2005) of the Sanctuary “Nossa Senhora da Conceição”. In addition, he was coordinator of youth ministry in the State of Maranhão (1988-1992) and Councilor of the National Pastoral Youth of the Brazilian Bishops’ Conference (1994-1997). In 2006 he was assistant priest of the shrine “São Judas Tadeu” in São Paulo. Since 2007 he is one of the formators of the Congregation of the Sacred Heart of Jesus in Cagayan de Oro City, Philippines.