“For Him I lived for Him I die” – with these words on August 12, 1925, Fr. Leo Dehon, the founder of the Congregation of the Priests of the Sacred Heart of Jesus, ended his earthly pilgrimage.  In this short summary he enclosed his passion for God and His love that was shown to the humankind through the open Heart of Jesus.  His desire was to establish the “Reign of God in the souls and society.”

Each year, the anniversary of his death is a special event celebrated by the whole congregation and different communities all over the world. Very often it is preceded by a special novena prayer commemorating  the life and works of our Founder, which gives us an opportunity to reflect on our charism and mission in the Church and society. The very day of his death anniversary is a day of thanksgiving for the gift of his life very much celebrated in all formation communities.

Like in previous years, the community in Cagayan de Oro, held a special Thanksgiving Mass and dinner to commemorate this anniversary. The concelebrated Mass was presided by Fr. Andrew Sudol, the formator of Postulacy Program and was attended by SCJ confreres, seminarians and friends of the congregation. 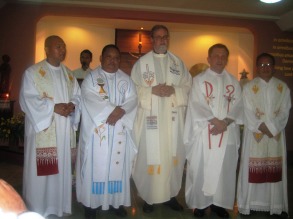 March 14 is the anniversary of the birth of Fr Dehon, the founder of our congregation. This year March 14 has another special meaning for the SCJs working in the Philippines. It is the date of the inauguration of the Philippine Region. It was a meaningful celebration for all of us here in the Philippines as well as for the whole congregation. At the center of this celebration was a Eucharist celebrated by many priests from the Philippines and abroad. The main celebrant, Fr. Claudio Dalla Zuanna, vicar general, who came as the delegate of Fr. General, officially inaugurated the region and installed the new regional administration. [Fr. Tom Cassidy, provincial superior of the U.S. Province, was also present.] During the mass, after the gospel, Fr. Francis Pupkowski, the new regional superior, made his profession of faith, and together with his council, was installed for a three-year term. March 14 is traditionally marked as a day of acceptance of new postulants to the formation program as well as a day of accepting new Dehonian youth. Therefore, after communion, six candidates were accepted to postulancy and 12 young men and women dedicated their lives to the Sacred Heart. They will study and follow the charism and way of life of Fr Dehon. During the mass we remembered in our prayers Fr. Jerry Sheehy, Dehonian priest and missionary, who died a few days ago in Scotland. He was in the first group of the missionaries that arrived in the Philippines 23 years ago to start the SCJ mission here. He worked in the Philippines for several years, and then began a new SCJ mission in Vietnam. This meaningful celebration ended with a dinner and a joyful gathering of all the priests, brothers and friends. There are 20 missionaries working in the Philippine Region from seven countries. Among them there are already seven young local priests, two deacons and 25 young religious in temporary vows. The region includes seven communities, three formation houses and five parishes. There are also social projects, many students on scholarship, and lay and young Dehonians who take an active part in the work, projects and SCJ missions here. The Sacred Heart Formation House in Cagayan de Oro is our center for candidates who apply to the congregation. We have three stages of initial formation: pre-college, aspirancy and postulancy. There are together 57 students in this house. In Manila is the scholasticate with 20 students of theology in temporary vows. The SCJ Philippine Region is open to our other entities in Asia and throughout the congregation. Thus, there are many students from Vietnam and India here for their initial formation and studies, and a few religious from Indonesia and other countries who spend their sabbatical time in Manila. The region is also a place of preparation for missionaries who will go to other areas in Asia. We are glad that we can be helpful to others, especially those who seek advanced study and formation. In this way we fulfill the wishes of our founder, Fr. Leo Dehon, and Bl. John Paul II, that the Philippines becomes a center and a source of evangelization of Asia.

On January 9 – 13, 2012 – the SCJ Philippine District held its annual assembly. The assembly took place in the Sacred Heart Formation House in Aluba, Cagayan de Oro City and was attended by 26 SCJs.

Among special participants attending this meeting was Fr. Paulus Sugino, the General Councilor from Rome and a representative from Vietnam.

The assembly started on Monday, January 9, 2012 at 4:00 PM with the reflection on the “Vow of Poverty”, conducted by Fr. Sugino.

The next two days were dedicated entirely to the personal sharing and reporting by different commissions and groups of interest, starting with the vocation promotion program and ending with the financial matters.

On the fourth day, the main topic in the morning session was the implementation of the strategic plan for the year 2012. In the afternoon the participants of the assembly played a soccer match against the seminarians. The match was won again by the seminarians.

The fifth and the last day of the assembly started with the report from Vietnam and was followed by Fr. Sugino’s time, who shared his observations regarding the Philippine District and information about the Congregation. In the afternoon, the group discussed the yearly plan and some other urgent matters concerning the District, which on March 14, 2012 will become a Region. The assembly concluded with the concelebrated Holy Eucharist presided by Fr. Paulus Sugino. 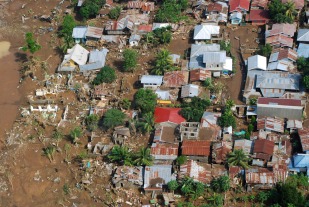 At least 650 people have died and more than 800 are missing after the tropical storm Washi or Sendong (local name) swept across the southern Philippines. More than 10-hour heavy rain that started, in the afternoon, on Friday, December 16, 2011, caused a massive flood that affected many places on the island of Mindanao.

The two most affected cities are Cagayan de Oro and Iligan. Thousands of houses were literary swept by the water or were very heavily damaged. Several barangays in Cagayan de Oro were completely under water. Many of the dead were swept out to sea. Others were buried alive as mud cascaded down mountain slopes. Water levels rose three feet in less than an hour, forcing thousands to climb onto the roofs of their homes where they huddled against wind speeds reaching 55 miles per hour. Unfortunately, in many cases only concrete houses could face the damaging force of the nature. The highest death toll is among the children, disabled and elderly people. According to the news, even one hundred thousand people might be displaced. Many of the victims lost everything they had. In Cagayan de Oro City there are 20 evacuation centers full of people waiting for help. At the moment, the most urgent need is potable water, food and cleaning materials.

The SCJ Formation House in Aluba , located in the upper part of Cagayan de Oro City, was not affected directly by the flood, except for lack of electricity and internet connection. However, the compound of Kasanag Daughters Foundations, run by SCJs, was once again under the water. This time the level of the water has gone even higher, reaching at least thirteen feet. Most of the things inside the buildings were damaged and need to be replaced. The flood left tons of mud behind. Fortunately, all the girls and the staff, together 35 people, were safely transferred to the SCJ Formation House and given shelter in the Pre-College building. They will stay with the SCJ community until the facilities of Kasanag will be ready to accommodate them again.

So far, it was one of the strongest tropical storms that ever passed through Mindanao. 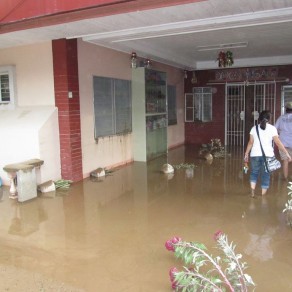 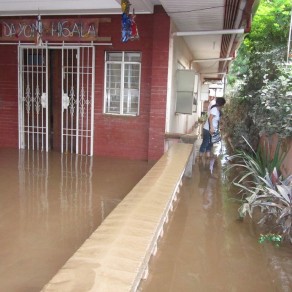