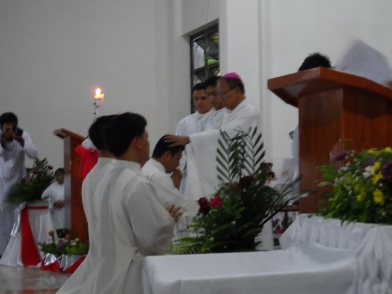 With  the  celebration  and  deacon  ordinations  set  for  16:00  on  Friday  and  yesterday being a six hour travel day back to Cagayan de Oro now is the first real chance I have to sit down to write this. It’s now Sunday morning and I will have the 10:00 English Mass at our parish of the Immaculate Conception, only a 5 minute walk from here. I do hope to have this journal entry done and sent long before I leave for that.

Friday’s celebrations were simply marvelous! The parishioners of St. Isidore the Farmer did  themselves  proud  in  providing  a  wonderful  liturgical  atmosphere  for  the  six deacons to be and their families. Obviously it was much easier for the 4 Filipinos to have their families attend the ordination. Though I’m not sure, I believe the majority of them come from the island of Mindanao since that’s where we have our major presence — although 2 of the 3 Filipino students I have come from near Manila on Luzon.

That’s  not  to  say  their  Vietnamese  brothers  did  not  have  family  present  and  even though English and/or Cebuano are foreign to them, they seemed to fit right in to enjoy and watch their sons and brothers being ordained deacons by Archbishop Al Sudarso, scj, of Palembang, Indonesia.

I wish I had enough bandwidth to embed a short video I took at the start of the Mass. Friday  marked  the  third  day  in  a  row  where  we  had  heavy  rains  during  the  late afternoon,  usually  between  15:00  and  sunset.  Friday  saw  the  heaviest  downpour though with less thunder and lightning. The roof of the new church is metal and does not  have  much,  if  any,  soundproofing  and  the  din  the  heavy  downpour  made  in  the church  almost  drowned  out  the  singing  and  praying.  Lucky  the  church  has  a  good sound system that could rise above the deluge Mother Nature was dropping from the sky.

Bishop  Emanuel  Cabajar,  CssR,  of Pagadian concelebrated  the  Mass  and preached.  This  time  he  did  it  in  English. The  Mass  and  ordinations  took  about  2 hours. Thanks to the rain the temperature in  the  church  was  rather  comfortable. While  we  had  fans  near  us  the  outlets have  as  yet  been  hooked  up  leaving  the fans  as  mere  decorations  —  thank goodness the rain cooled us down.

After  Mass  we  returned  to  the  old  church  which,  like  the  other  day,  served  as  our dining hall with the same Pagadian catering service handling the reception. As with the two  previous  meals  they  served  this  one  was  heavy  on  meats  and  rice, but  with  no vegetables to speak of but at least two or three kinds of fruit, especially pineapple and watermelon. As we foreign guest have learned any celebration would be a disaster if roasted pig were not there in abundance. We had two for the crowd to devour. I went up once or twice to try to get a piece, but I couldn’t get near the action. Clearly the Filipinos love their roasted pork and nothing goes to waste!

I was wondering where the show would take place and soon learned it was going to be at the local school gym. Don’t think of a gym in our terms, this is more like a covered outdoor stadium with bleachers on one side, a roof covering the entire expanse with the sides left open — better to keep things cool for fans, players/actors alike.

We were also lucky the rains had stopped several hours before we headed over to the gym. You did have to watch where you walked once leaving the main road as it then became a dirt track. Once again, my smartphonecame in handy not for calling, but for seeing  using  its  build  in  flashlight.  As  I’ve  written  before  that  has  been  one  of  its most useful features on my trips to India and the Philippines since calling is much too expensive.

As for the show itself the members of  St.  Isidore  the  Farmer’s  parish and  its many chapels  did themselves  proud.  The  show opened  with  an  adult  choir,  that included  our  own  Br.  Yohanes Baptista  Sismadi,  scj,  singing  the Philippine  national  anthem.  This choir  would  ma e  another appearance during the course of the evening as one of the adult acts.

Immediately  after  the  national anthem a prayer/dance was offered as the benediction for the evening. The dance would play the most important part of the evening’s entertainment. The  show  lasted  about  two  hours  and  interspersed  between  some  of  the  acts  was  a narration  of  the  25  year  history  of  the  SCJ  presence  in  the  Philippines.  During  the course of the show we had young girls (maybe between 8 and 10) come by with water and sweets for us to enjoy. As the SCJs were the honored guests we were seated in the front row on chairs in front of the bleachers and close to the stage — that made my taking photos with my iPhone rather easily.

Instead of adding more words, let me add a few photos of some of the acts. Note the teenagers performed many of the dances and I was amazed at the various routines they had to learn and how well they were able to carry them out. Of course, the little kids act was a scene stealer, especially one little girl who was soon lost as what to do and made up her own dance, including a long stint of simply sitting on the floor and waving her arms. I do know, parents, friends, parishioners and all the SCJS present went home with light hearts after such a delightful, and I do mean that, evening of entertainment. Dumalinao may not be Broadway or Hollywood, but on this night they don’t take a backseat to anyone.