January 16, 2015, the second day of the visit of Pope Francis in the Philippines was full of activities. In the morning, the Pope met with President Benigno Aquino, together with other political leaders, urging them to reject corruption and promote “honesty, integrity and commitment to the common good”. Speaking to the civil authorities and diplomats gathered in Manila’s Rizal Ceremonial Hall, the Pope spoke of the need to defend families, young people and the elderly, ensuring social justice and respect for the human dignity of all. 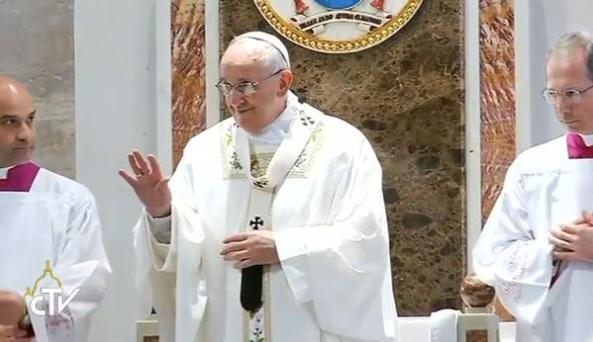 Later on, celebrating Mass in Manila’s Cathedral, Pope Francis urged Catholics in the Philippines to be ambassadors for Christ and ministers of reconciliation, proclaiming the Good News of God’s infinite love, mercy and compassion. Speaking to bishops, priests, religious and seminarians gathered in the Cathedral, the Pope said the Church in the Philippines is called to acknowledge and combat the causes of the deeply rooted inequality and injustice which mar the face of Filipino society, plainly contradicting the teaching of Christ.

As Filipinos prepare to mark the fifth century of the arrival of the Church in the Asian nation, the Pope said Catholics must build on that legacy of the past by building a society inspired by the Gospel message of charity, forgiveness and solidarity in the service of the common good.

The Pope challenged his listeners to show God’s mercy and compassion and become prophetic witnesses to the Gospel in order to transform Filipino society. If the Church fails to put the poor at the centre of its ministry, the Pope stressed, we fail to understand the message of Christ.

After the Mass, Pope Francis made an unscheduled stop at a center for street children in Manila. He visited a home for street children run by the ANAK-Tnk charitable foundation.  The Pope spent almost a half an hour with some 320 children who celebrated his visit at the centre with songs and dance, hugs and an exchange of brief words.

The children were gathered in the centre’s courtyard for their meeting with Pope Francis.  The children had prepared small gifts for the Holy Father, including a wooden image of Our Lady – a copy of the one displayed in the centre’s chapel, a photo of the Holy Sacrament amid rubbish for the adoration of group of scavengers, and a mosaic made by a child out of bits of colored paper.

Concluding his visit with the children with a blessing, Pope Francis went on to have lunch at the nunciature in Manila before an afternoon meeting with families.

In the afternoon, during his meeting with the families, at the “Mall of Asia Arena,” Manila’s principle sports arena, the Pope Francis told the Filipino families that they should take time to rest and to pray together and to be examples of holiness.  The world “needs good and strong families” to overcome threats of poverty, materialism, destructive lifestyles, and those caused by separation due to migration; “the Philippines needs holy and loving families to protect the beauty and truth of the family in God’s plan.”