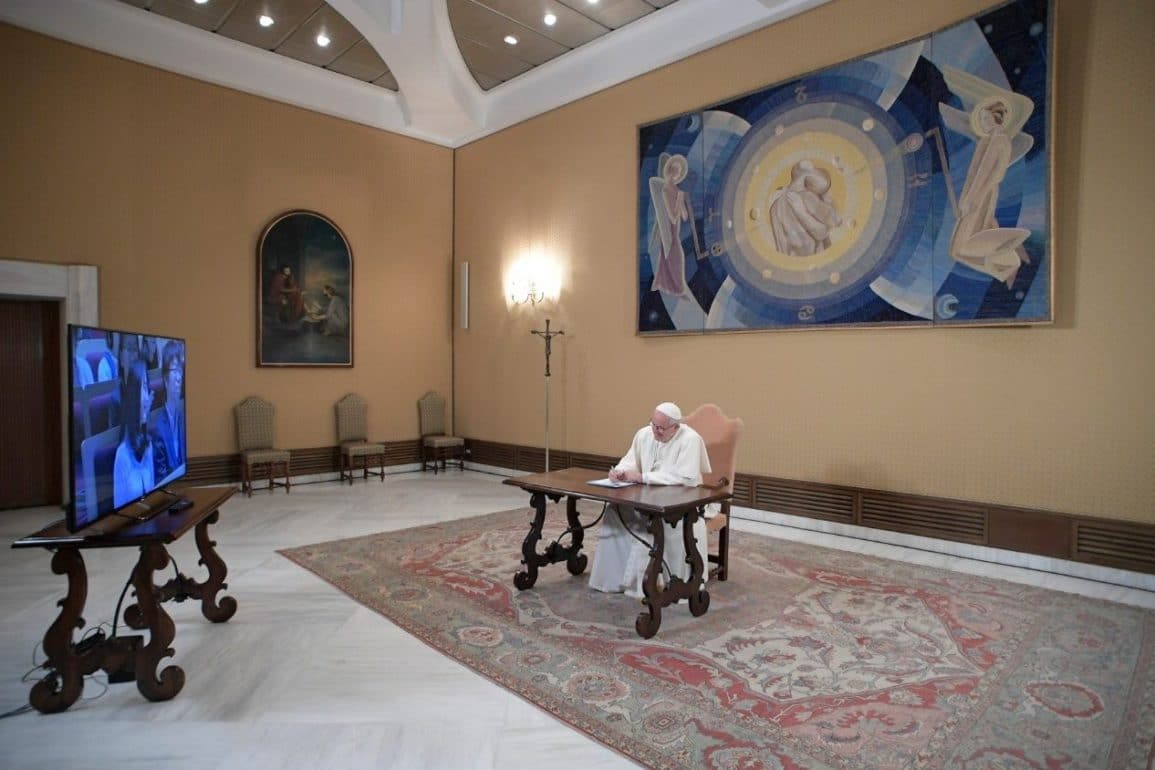 Every year on a Sunday before Pentecost the Church celebrates the achievements of the communications media and focuses on how it can best use them to promote gospel values.

World Communications Day was established by Pope Paul VI in 1967 as an annual celebration that encourages us to reflect on the opportunities and challenges that the modern means of social communication (the press, motion pictures, radio, television, and the internet) afford the Church to communicate the gospel message.

In setting it up on Sunday 7th May 1967, less than two years after the Second Vatican Council, Pope Paul VI, knowing that the Church is truly and intimately linked with mankind and its history, wanted to draw attention to the communications media and the enormous power they have for cultural transformation.

He and his successors have consistently recognized the positive opportunities the communications media afford for enriching human lives with the values of truth, beauty, and goodness, but also the possibly negative effects of spreading less noble values and pressurizing minds and consciences with a multiplicity of contradictory appeals.

Pope John Paul II (1990) in his encyclical Redemptoris Missio 37 said: “The world of communications is the first Areopagus of the modern age, unifying humanity and turning it into what is known as a ‘global village’. The communications media have acquired such importance as to be for many the chief means of information and education, of guidance and inspiration for many people in their personal, family, and social behavior. In particular, the younger generation is growing up in a world conditioned by the mass media.”

Increasingly aware of the world as a global village and the power of the media as a free marketplace for philosophies and values, the Church has sought to be in there with its message and to use the media to proclaim the values it sees are beneficial for human development and for the eternal welfare of people.

Two important documents of the Pontifical Council for Social Communications – Communio et Progressio (1971) and Aetatis Novae (1992) have presented an analysis of the world of the communications media and made recommendations for the Church’s action. The Vatican itself has set a headline in updating its use of the full range of the communications media. On a recent visit to Vatican Radio, Pope Benedict was presented with an iPod of the music of Mozart in which he has a particular interest.

For this year Pope Francis has chosen ‘Listen’ as the theme for the 2022 World Day of Communications.  Announcing the theme on September 29, the Feast of the Archangels, the Vatican said, “In the search for truth, Catholic communicators must learn how to listen above all else.”

Recalling that faith comes from hearing, the Pope quotes the words of Jesus who urged his disciples: “Take care, then, how you listen.” The Holy Father described the hearing like the one most favored by God among the five senses because it is less invasive, more discreet than sight, and leaves human beings free.

Citing the words of St Augustine, the Pope urged the need “to listen from the heart.” In the Church, Pope said, there is a great need to listen to and hear one another.

We should listen with the ears of God so that we may speak the word of God. The first service we owe to others in communion consists in listening to them. He also quoted the words of German theologian Dietrich Bonhoeffer who said: “Whoever does not know how to listen to his brother or sister will soon no longer be able to listen to God either.”

Communication today assumes much importance in the church as well as society. Political leaders increasingly use social media to campaign and connect with the masses, and promote particular ideologies and causes. The growing influence of social media is evident in the way powerful forces use social media to mobilize mass support for their cause.

Today, even wars and mass protests are fought with high decibel media campaigns more than weapons. Fake news, disinformation, misinformation, and manipulation of data are used to win power over the masses. The huge misinformation campaign and the speed with which they were spread across the world led to the coining of the word ‘Infodemic’.

Church communication is to be rooted in truth. The World Day of Communication is a clarion call to all Christian communicators, leaders, and Christians to acknowledge that the media are God’s gift and need to be used with responsibility and effectively to promote the common good and to proclaim the Good News of Christ.

The World Day of Communications and the Pope’s message is a clarion call to awaken to the importance of strengthening the church’s efforts to respond to a fast-changing world of media.

Catholic communication ministry cannot be complacent and rest on its laurels but needs to evolve greater professionalism, strategic planning, networking, and financial support. Church organizations and leadership cannot ignore the urgency of taking communication more seriously and with greater commitment and passion than what is being done today. Seminarians and pastoral leaders need better formation and lay professionals need greater support and recognition.

There are many inspiring models and path-breaking initiatives in the church’s ministry of social communication, but they need to be strengthened and emulated to take forward the mission of the church.

The feasts of the Ascension and the Pentecost are at the heart of the Church’s missionary mandate. Communication is pivotal in our times to respond to Christ’s call to proclaim the Good News to the whole world.

Besides the patron of the Catholic journalist, Saint Francis de Sales, and of the television Saint Clare of Assisi, the church in our times can draw inspiration from Saint Mother Teresa, Saint John Paul II, and the recently canonized Saint Titus Brandsma and Blessed Carlo Acutis, who have shown how best social communication can serve the Church and its mission for the people of God.