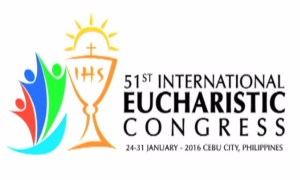 Seventy nine years after the Philippines first hosted the International Eucharistic Congress (IEC) in Manila, the 2016 IEC kicked off in Cebu on January 24, 2016, with thousands of Catholic devotees worldwide in attendance.

The IEC opened with a High Mass at the Plaza Independencia at 4 pm. The mass was celebrated by the legate from Pope Francis, His Eminence Charles Maung Cardinal Bo.

The eight-day religious congress is expected to draw 12, 000 participants from 55 countries across the globe.

The Philippines first hosted the IEC in Manila in 1937, the first time it was held in Asia.

Dubbed as “Olympics of the Soul,” this year’s theme is “Christ In You, Our Hope of Glory.”

More than 1,500 participants attend the 3-day International Eucharistic Congress (IEC) Theological Symposium at the Cebu Doctors’ University (CDU) which started on January 20 and will end on January 22, 2016.

The Theological Symposium is serving as an underpinning for the 51st International Eucharistic Congress that will be held from January 24 – January 31, 2016, in Cebu. The theme of the IEC 2016 is “Christ in You, Our Hope of Glory.” (Col. 1:27). The 33rd IEC on 1937 was held in Manila, the first for the country and has returned only in the Philippine shores after 79 years.

Among the topics to be taken up are the Christian virtue of hope, an exegetical discussion of a passage from the gospel of St. John, liturgy and inculturation, the history of the “Novus Ordo”, the evangelization of the secular world, and a catechesis on the Sunday Eucharist.

The topics have been chosen for their relevance to the theme of the IEC which is three-fold: the centrality of the Eucharist in Christian life, the liturgical celebration and the social dimension of the Eucharist.

It is hoped that the symposium would give clear ideas to those who are not yet familiar with the theological understanding of the sacrament, or otherwise would offer a review if not deepen the knowledge of those who already have studied and are availing of it.

The symposium would also give a glimpse of the current issues, problems and challenges regarding this sacrament in the different places and cultures of the world.

Workshops will also be held to come up with pastoral plans, strategies and programs.

Here is the homily for the Concluding Mass for Day 3 of the ‪#‎IEC2016‬ Theological Symposium by Archbishop Antonio Ledesma, SJ, DD.