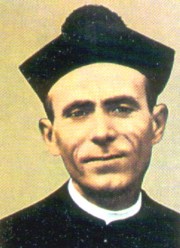 On September 22, members of the Priests of the Sacred Heart remember Blessed Fr.  Juan Maria de la Cruz, who was beautified on March 11, 2001 in Rome by Pope John Paul II.

The life and martyrdom of Fr. Mendez, SCJ, introduces us to a dark chapter in modern Spanish history – the religious persecution during the Civil War from 1936 to 1939.

Mariano García Méndez was born on September 25, 1891, in San Esteban de los Patos in the Province of Avila, the firstborn of 15 children. After his seminary training, he was ordained a priest for the diocese of Avila. His deep desire to lead a life of greater perfection led him toward religious life, but his first steps in this direction failed due to his poor health.

After his novitiate at Novelda (Alicante), Fr. Mendez made his first profession on October 31, 1926 and took the religious name of Fr. Juan María de la Cruz. Enjoying limited success as teacher in the minor seminary at Novelda, he became a fundraiser in 1929, begging for money in villages and market towns and looking for young students to direct to the congregation’s minor seminary.

The Civil War, opposing nationalists and republicans, broke out on July 18, 1936. In this context, on July 23, 1936, Fr. Juan traveled to Valencia seeking to find refuge with one of the congregation’s benefactors. “While traveling from the train station to the home of Señora Pilar, he passed by the church of ‘de los Juanes’ in the center of the city. He was horrified by ‘a horrible spectacle’ — his own words — when he saw men ripping apart the church interior and preparing to burn down the church. He could not stand by in silence. Fr. Juan did not hide his disdain at seeing the church torched. When the evildoers said to each other: ‘He’s a reactionary!’ He responded ‘No, I am a priest!’ The republicans there upon arrested him and took him to jail Modelo of Valencia.”

Afterwards, witnesses recalled that Fr. Juan led an exemplary priestly life in prison. He remained faithful to his religious practices, cared for other’s pastoral needs as he prepared for martyrdom. On the night of August 23-24, 1936 together with nine other prisoners, Fr. Juan was taken south of Valencia to be shot. On August 24th the bodies of the victims were thrown into a common grave in the cemetery of Silla.”