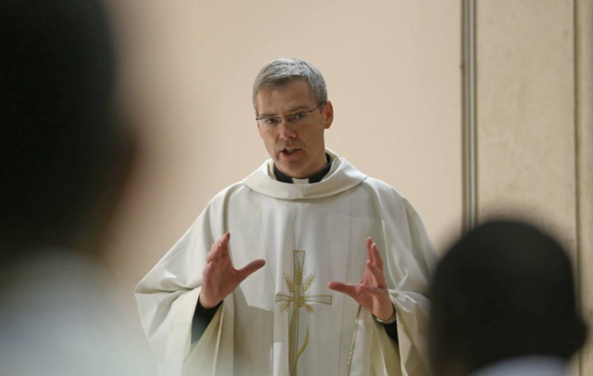 The date of the episcopal ordination of Fr. Heiner Wilmer, SCJ,  the 10th Superior General of the Dehonians, has been announced.

Msgr. Heinz-Günter Bongartz invites you to the celebration, which will take place at the Cathedral of Mariä Himmelfahrt in Hildesheim, on September 1st at 10:00 a.m.

Fr. Heiner will become the 71st bishop of the diocese.

The presider and ordaining bishop will be the archbishop of Hamburg, Msgr. Stefan Heße. Other concelebrants are to include Msgr. Franz-Josef Bode (Osnabrücker) and Msgr. Norbert Trelle (bishop emeritus of Hildesheim). The papal bull will be presented by Archbishop Nikola Eterović (apostolic nuncio).

On 6 April 2018, the Holy Father, Pope Francis  had nominated Fr. Heiner Wilmer, SCJ, to be a bishop of Hildesheim, Germany.

Fr. Heiner was born 9 April 1961 in Schapen. He grew up on a farm in Emsland. In 1980 he graduated at the Leoninum, a high school operated by the Dehonians in Handrup close to his hometown. In the same year, he entered the novitiate of the congregation in Freiburg. From 1981 to 1986 he studied theology in Freiburg and romance philology (romance languages) in Paris. After that he was ordained as priest by Archbishop Oskar Saier, the archbishop of Freiburg. He then went to Rome to study at the Gregorian Pontifical University; his focus was French philosophy. In 1991 Wilmer earned a Doctor of Theology in Freiburg, where he dealt with the concept of mysticism in the philosophy of Maurice Blondel. His works were awarded the Bernhard Welte Prize.

Shortly after that, he studied for a Master of Arts in History. Sometime before he finished his first master’s degree Wilmer met the Dutch priest Henri Nouwen. At the request of Nouwen, Wilmer represented him for four months as a pastor at L’Arche Daybreak in Toronto, a facility for people with disabilities. After that he worked for two years as a school counselor and taught religion, political science and history at the Liebfrauenschule Vechta (a German high school) in Niedersachsen, Germany. In 1997 he went to the United States for a year to teach German and history at the Fordham Preparatory School, a Jesuit high school in the Bronx (New York). Upon his return, he became headmaster of the SCJ high school Leoninum in Handrup.

In 2007, Fr. Wilmer was elected for Provincial Superior of the German Province of the Dehonians.

Five years later he published a book (“Gott ist nicht nett – God is not kind”) in which he reflected on his faith and his decision to become a priest.

He succeeded Fr. José Ornelas Carvalho, SCJ, who held the office for 12 years (two six-year terms). Carvalho is now bishop of the Diocese of Sétubal (Portugal).